Monthly Feature Story-January 2022-The First Sunrise of the Year 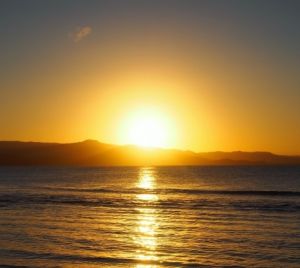 In Japan, there is a custom of praying to the sun that rises on the morning of New Year's Day. This is because people believe that Toshigami-sama, the deity of the year, appears with the first sunrise of the year. It is said that the deity of the year brings good fortune to every house throughout the year, and also brings about a good rice harvest, so people join their hands in prayer to express their gratitude for the past year, and then pray for good fortune and well-being for the new year, and watch the sun rising.

People who do not go and see the first sunrise display a hanging scroll with the first sunrise on it in the alcove. In traditional Japanese New Year's dishes, there are red and white fish cakes because they have a similar shape to the first sunrise. In Shinto, an indigenous Japanese religion, it is believed that there are a myriad of deities and among them, the most important deity is Amaterasu, the sun goddess, so the sunrise has a special meaning.

How would you like to go and see the first sunrise on the morning of New Year's Day next year?